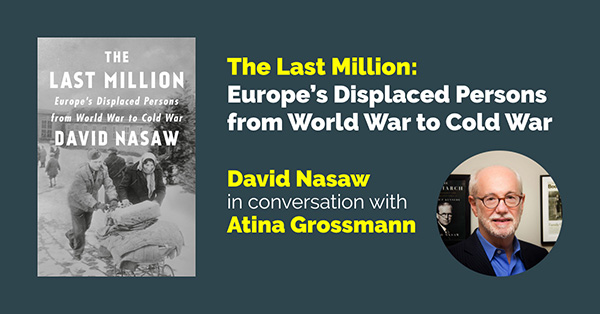 Historian David Nasaw is the author of the award-winning, acclaimed biographies The Patriarch, Andrew Carnegie, and The Chief.  In his sweeping new masterwork, THE LAST MILLION: Europe’s Displaced Persons from World War to Cold War (Penguin Press), Nasaw turns his attention to the gripping yet little-known story of the million displaced persons left behind in Germany following the end of World War II: Jews, Poles, Estonians, Latvians, Lithuanians, Ukrainians, and other Eastern Europeans who refused to go home or had no homes to return to. The Last Million would spend the next three to five years in displaced persons camps, temporary homelands in exile, divided by nationality, with their own police forces, churches and synagogues, schools, newspapers, theaters, and infirmaries. By 1952, the Last Million were scattered around the world. As they crossed from their broken past into an unknowable future, they carried with them their wounds, their fears, their hope, and their secrets.

Nasaw will share this history in a wide-ranging conversation with Atina Grossmann, author of Jews, Germans, and Allies: Close Encounters in Occupied Germany (Princeton University Press) and Professor of History in the Faculty of Humanities and Social Sciences at the Cooper Union, whose research relates to transnational Jewish refugee stories.

Ticket Info: Pay what you wish; registration required at /tickets/the-last-million-2021-03-24 to receive a Zoom link