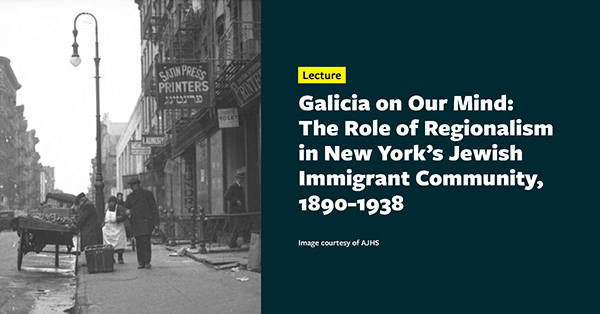 Between 1881 and 1910 more than 200,000 Jews left the Habsburg province of Galicia, a region that is today divided between southeastern Poland and western Ukraine. No longer living in the places of their childhood, they settled in urban centers, such as New York’s Lower East Side. In this culturally diverse and densely populated immigrant neighborhood, Galician Jews began to search for new relationships that linked the places they left and the ones where they arrived and settled.

In his talk, Dr. Sophie Bookhalter Graduate Fellow Oskar Czendze (University of North Carolina at Chapel Hill) in conversation with Dr. Jeffrey Shandler (Rutgers University) will take the audience to the streets of New York’s immigrant quarter and trace the lives and culture of Jews who arrived from Galicia. Examples from autobiographical writings, Yiddish press, music and theatre, Jewish hometown associations, as well as visual material by American Jewish tourists visiting their hometowns, will illuminate the significance of local and regional identifications from the early immigrant era to the interwar period. Why did an Austrian province that had ceased to exist in 1918 continue to loom large in the American Jewish mind, how did the concept of Galicia change over time, and what does the “Galitsyaner” tell us about the role of regionalism in modern Jewish history and culture?