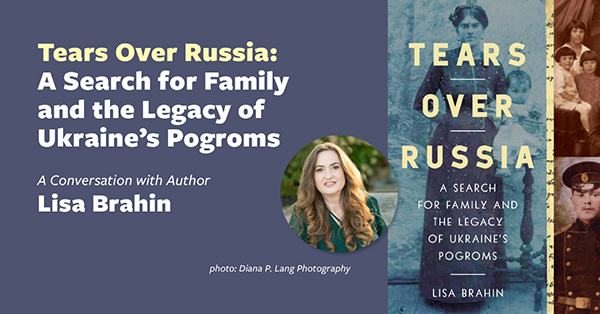 Between 1917 and 1921, 20 years before the Holocaust began, an estimated 100,000 to 250,000 Jews were murdered in anti-Jewish pogroms across Ukraine. Lisa Brahin grew up transfixed by her grandmother Channa’s stories about being forced to flee her hometown of Stavishche, as armies and bandit groups raided village after village, killing Jewish residents. Channa described a perilous three-year journey through Russia and Romania, led by a gallant American who had snuck into Ukraine to save his immediate family and ended up leading an exodus of nearly 80 to safety.

With almost no published sources to validate her grandmother’s tales, Lisa embarked on her incredible journey to tell Channa’s story, forging connections with archivists around the world to find elusive documents to fill in the gaps. She also tapped into connections closer to home, gathering testimonies from her grandmother’s relatives, childhood friends, and neighbors.

The resulting book, Tears over Russia: A Search for Family and the Legacy of Ukraine's Pogroms brings to life a piece of untold Jewish history. Lisa will be in conversation with Lauren Gilbert, Senior Manager for Public Services at the Center for Jewish History.