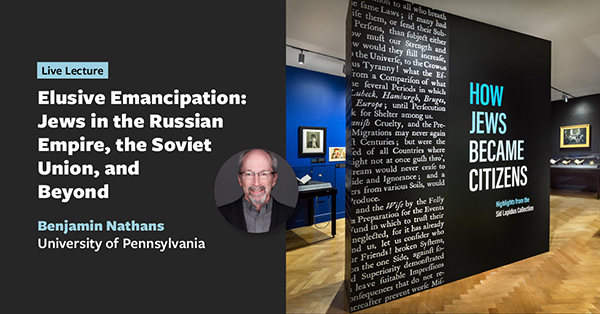 The majority of the world’s Jews entered the twentieth century unemancipated. Most of that majority lived in what is today Ukraine, Belarus, and Lithuania, at the time part of the Russian Empire.  Join Benjamin Nathans (University of Pennsylvania) as he explores why emancipation came so late to the empire of the tsars, what role Jews played in its arrival, and how the Bolshevik Revolution recast the meaning of emancipation itself, with consequences that are still with us today.

About the Speaker
Benjamin Nathans is the Alan Charles Kors Associate Professor of History at Penn, specializing in modern Russia, the Soviet Union, modern Jewish history, and the history of human rights. He is author of the prizewinning Beyond the Pale: The Jewish Encounter with Late Imperial Russia, which has been translated into Hebrew and Russian, and co-editor, most recently, of the collective volume From Europe’s East to the Middle East: Israel’s Russian and Polish Lineages.  His book To the Success of Our Hopeless Cause: The Many Lives of the Soviet Dissident Movement is forthcoming with Princeton University Press. He chaired the international committee of scholars hired by Ralph Appelbaum Associates, the New York-based museum design firm, to help create the Jewish Museum and Tolerance Center in Moscow, which opened in 2012.  His essays have appeared in The Economist, The Washington Post, The New York Review of Books, The Times Literary Supplement, and other venues.