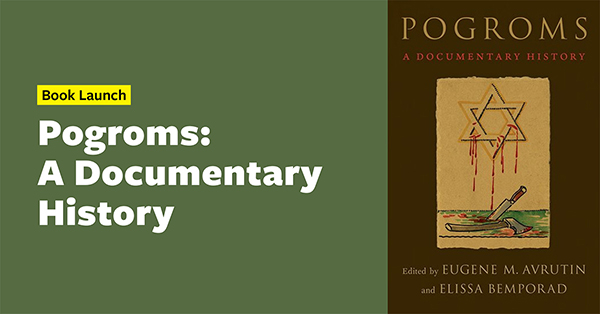 From the 1880s to the 1940s, an upsurge of explosive pogroms caused much pain and suffering across the eastern borderlands of Europe. Rioters attacked Jewish property and caused physical harm to women and children. During World War I and the Russian Civil War, pogrom violence turned into full-blown military actions. In some cases, pogroms wiped entire Jewish communities out of existence. More generally, they were part of a larger story of destruction, ethnic purification, and coexistence that played out in the region over a span of some six decades. Pogroms: A Documentary History surveys the complex history of anti-Jewish violence by bringing together archival and published sources--many appearing for the first time in English translation. This landmark volume and its distinguished roster of scholars provides an unprecedented view of the history of pogroms. Speakers include co-editors Elissa Bemporad(CUNY) and Eugene Avrutin (University of Illinois) as well as Darius Staliunas (Lithuanian Institute of History) and David Myers (UCLA).

Eugene Avrutin  is the Tobor Family Endowed Professor of Modern European Jewish History at the University of Illinois, Urbana-Champaign, USA. He is the author and co-editor of several award-winning books, including Jews and the Imperial State: Identification Politics in Tsarist Russia (2010) and The Velizh Affair: Blood Libel in a Russian Town (2018). His most recent book, Racism in Modern Russia: From the Romanovs to Putin, will be published in the Russian Shorts series by Bloomsbury in 2022.

Elissa Bemporad, is Professor of History and Ungar Chair in East European Jewish History and the Holocaust at Queens College and CUNY Graduate Center. She is a two-time winner of the National Jewish Book Award. She is the author of Becoming Soviet Jews: The Bolshevik Experiment in Minsk (2013 IUP), and Legacy of Blood: Jews, Pogroms, and Ritual Murder in the Lands of the Soviets (2019 OxfordUP). Elissa is the co-editor of two volumes: Women and Genocide: Survivors, Victims, Perpetrators (2018 IUP); and Pogroms: A Documentary History (Oxford University Press, 2021). She is currently completing the first volume of the Comprehensive History of Soviet Jews (forthcoming with New York University Press), and at work on a biography of Ester Frumkin. She is co-editor of Jewish Social Studies.

David N. Myers is the Sady and Ludwig Kahn Professor of Jewish History at UCLA, where he serves as the director of the UCLA Luskin Center for History and Policy. He is the author or editor of more than fifteen books in the field of Jewish history, including the forthcoming American Shtetl: The Making of Kiryas Joel, a Hasidic Village in Upstate New York (Princeton) with Nomi Stolzenberg. Myers also serves as President of the New Israel Fund.

Darius Staliunas is the author of Making Russians. Meaning and Practice of Russification in Lithuania and Belarus after 1863 (Amsterdam/New York, NY: Rodopi, 2007); Enemies for a Day: Antisemitism and Anti-Jewish Violence in Lithuania under the Tsars (Budapest/New York: CEU Press, 2015); and Lithuanian Nationalism and the Vilnius Question, 1883-1940 (Marburg: Herder-Institut, 2015; co-author – Dangiras Maciulis). He is the editor of Lithuanian studies series at Academic Studies Press (Boston, USA). His research interests include issues of Russian confessional policy in the so-called Northwestern Region (Lithuania and Belarus), ethnic conflicts as well as problems of places of memory in East Central Europe.