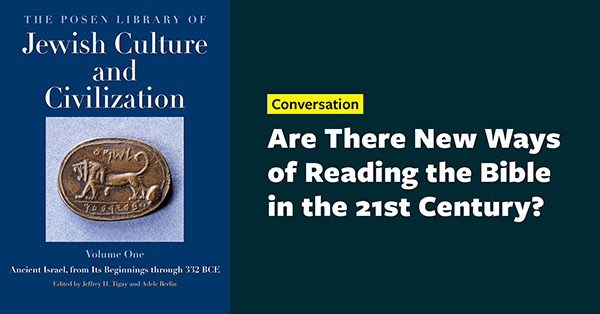 This program will focus on The Posen Library of Jewish Culture and Civilization, Volume 1: Ancient Israel, from Its Beginnings through 332 BCE, edited by Jeffrey H. Tigay and Adele Berlin, and will feature Alison Joseph in conversation with Deborah Dash Moore.

For two thousand years, Jews and Christians have been reading the Hebrew Bible. Are there new ways to read it in the 21st century? To uncover what's new in this ancient document, join the discussion with The Posen Library of Jewish Culture and Civilization Editor and Biblical Scholar Alison Joseph in conversation with Professor Deborah Dash Moore, Editor in Chief of The Posen Library.

What do you learn about the Torah laws when you set them alongside non-biblical legal documents of the period? How does reading Miriam's song next to Deborah's song change how we understand these pieces of poetry? What can artifacts of this period show us about daily life in ancient Israel—its religious practices, household tasks, architecture, and art? Explore how we can read the Bible today in relation to the development of Judaism from ancient times to the present.

Alison L. Joseph is Senior Editor of The Posen Library of Jewish Civilization and Culture. She brings her academic expertise in Hebrew Bible and ancient Judaism to the management of the ancient volumes of The Posen Library. Dr. Joseph earned a Ph.D. in Near Eastern Studies from the University of California, Berkeley and a M.A. in Jewish Studies from Emory University. Her first book Portrait of the Kings: The Davidic Prototype in Deuteronomistic Poetics, received the 2016 Manfred Lautenschlaeger Award for Theological Promise. She has previously taught at Swarthmore College, The Jewish Theological Seminary, Towson University, Villanova University, Haverford College, and Ursinus College.