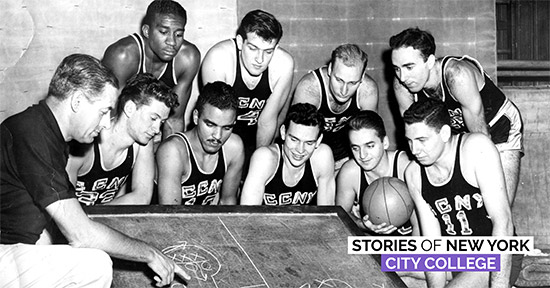 This February and March, join historians, writers, filmmakers, and alumni at the Center for Jewish History for a series of discussions and films about City College, its rich Jewish history, and its transformative role in the lives of so many.

At a school better known for intellectual achievement than athletic prowess, the 1949-1950 City College Beavers were the unlikeliest of champions.  An unheralded group of Jewish and African-American city kids, the Beavers stunned the basketball world by becoming the only team in history to win both the NIT and NCAA tournaments in the same season. But the next year, the starting five were arrested, charged with point shaving, and engulfed in a scandal that would affect the rest of their lives. Bestselling author Matthew Goodman discusses his critically acclaimed new book, The City Game: Triumph, Scandal, and a Legendary Basketball Team, with Clyde Haberman, CCNY 1966. They are joined by former City College basketball co-captain, Ron Nadell, CCNY ’51 and former sports editor of The Campus, Mort Sheinman CCNY ’54.

Matthew Goodman is a New York Times bestselling author of four books of nonfiction: The City Game: Triumph, Scandal, and a Legendary Basketball Team (2019); Eighty Days: Nellie Bly and Elizabeth Bisland’s History-Making Race Around the World; The Sun and the Moon: Hoaxers, Showmen, Dueling Journalists, and Lunar Man-Bats in Nineteenth-Century New York; and Jewish Food: The World at Table. Matthew’s books have been Barnes & Noble Discover Great New Writers, Indie Next “Great Reads,” and Borders Original Voices selections, and have been translated into eight languages. His writing has appeared in the Wall Street Journal, USA Today, The American Scholar, the Harvard Review, Salon, the Forward, and many other publications. He lives in Brooklyn.

Ron Nadell CCNY ‘51, was born in Brooklyn. He was a star player for the Erasmus Hall High School basketball team and named co-captain of the CCNY Beavers for the 1950-51 season. After graduating, Ron moved to Long Island where he worked in real estate. Married for 63 years, Ron and his wife Rhoda have 3 children, 5 grandchildren and 2 great-grandchildren.

Mort Sheinman CCNY ’54, is Bronx born and raised. After attending Bronx public schools, he entered CCNY in 1950. Mort joined the student newspaper, The Campus, and during his undergraduate years he was a sportswriter, sports editor and managing editor. When he was a freshman, the CCNY basketball team made history by winning the NIT and NCAA championships and he was a sophomore when the “point-shaving” scandal broke. Mort spent his career in journalism writing for a variety of publications including the New York Daily News and Women’s Wear Daily, where he was the long-time managing editor. Mort was also the founding managing editor of W magazine. He is a long-time board member and former president of the Society of the Silurians (now called the Silurians Press Club), and he was inducted into the CCNY Communications Alumni Group Hall of Fame in 2003.

Clyde Haberman (moderator) CCNY '66, first worked at The New York Times while a student at CCNY. Having been editor-in-chief of the college newspaper The Campus, he became CCNY correspondent for the Times. In 1966, he began reporting for The New York Post, ultimately returning to The New York Times in 1977. From 1982 to 1995, Clyde was a foreign correspondent based successively in Tokyo, Rome and Jerusalem. Returning home, he wrote the twice-a-week NYC column from 1995 to 2011 and in 2009, he was part of a Times team that won the Pulitzer Prize for Breaking News, for coverage of the prostitution scandal that led to Governor Eliot Spitzer's resignation. Since 2014 he has written a regular Times column accompanying Retro Report, a series of video documentaries exploring major news stories of the past and their continuing resonance.

Clyde is also the writer and editor of The Times of the Seventies: The Culture, Politics, and Personalities That Shaped the Decade (2013 by Black Dog & Leventhal). Among other journalistic honors, he was inducted in 2015 into the New York Press Club's Hall of Fame.