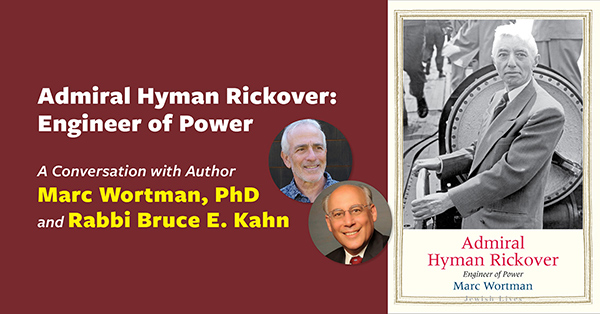 Hyman George Rickover (1899–1986), born Chaim Godalia Rykower in a Polish shtetl, was the longest-serving U.S. military officer in history and an almost mythical figure in the United States Navy. Possessing engineering brilliance, a ferocious will, a combative personality, and an indefatigable work ethic, he oversaw the development of nuclear marine propulsion and the first civilian nuclear utility.

In a new biography in the Jewish Lives series at Yale University Press, independent historian and award-winning freelance journalist Marc Wortman, PhD, explores the constant conflict Rickover faced and provoked, tracing how he revolutionized the navy and Cold War strategy. Wortman will be in conversation with Bruce E. Kahn, retired U.S. Navy Chaplain and Rabbi Emeritus at Temple Sholom in Chevy Chase, MD, who co-officiated at Rickover’s memorial service.