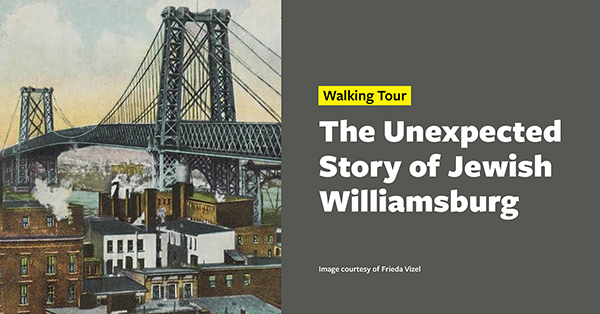 After the Holocaust, Hungarian survivors, many of whom were Hasidic, became the next wave of immigrants to make their American starter homes in Williamsburg. But this second wave did not want to move on and assimilate. They stayed in Williamsburg, despite the polluted East River, high crime, and crumbling infrastructure, and maintained their traditions. Even as North Williamsburg has been reborn as a trendy hipster enclave in recent decades, the fourth generation of Hasidim continue to thrive in South Williamsburg. Our tour will take us through this story by way of the buildings, streets, and synagogues, with a nosh of the famous Hungarian kosher baking. And, since we’ll be visiting during the week of Sukkos, the community’s lively atmosphere will enrich your experience of contemporary Jewish Williamsburg.

About the Tour Guide


Frieda Vizel  is a New York City tour guide who specializes in Jewish Williamsburg. She grew up in the Satmar Hasidic community and her four holocaust survivor grandparents lived in Williamsburg. She has since left the fold but remains drawn to the area‘s rich legacy.

Location and Other Details
This two-hour tour will begin at the Williamsburg Bridge Plaza Bus Terminal, a glass building at the corner of Broadway and Havermeyer Streets. Please plan to arrive at 10:45 AM to check in. We will not wait more than a few minutes for late arrivals. This tour will take place rain or shine. Note: Some tour stops are not wheelchair accessible. Additional logistical information will be emailed to all registrants one week before the tour, and again the day before the tour.