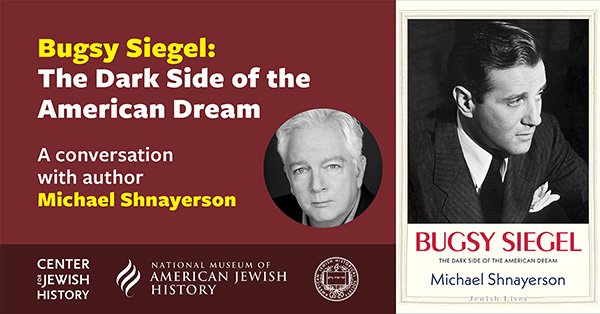 In a brief life that led to a violent end, Benjamin “Bugsy” Siegel (1906–1947) rose from desperate poverty to ill-gotten riches, from an early-twentieth-century family of Ukrainian Jewish immigrants on the Lower East Side to a kingdom of his own making in Las Vegas. In this captivating portrait, author Michael Shnayerson sets out not to absolve Bugsy Siegel but rather to understand him in all his complexity.

Through the 1920s, 1930s, and most of the 1940s, Bugsy Siegel and his longtime partner in crime Meyer Lansky engaged in innumerable acts of violence. As World War II came to an end, Siegel saw the potential for a huge, elegant casino resort in the sands of Las Vegas. Jewish gangsters built nearly all of the Vegas casinos that followed. Then, one by one, they disappeared. Siegel’s story laces through a larger, generational story of eastern European Jewish immigrants in the early- to mid-twentieth century.

Program registrants will receive a code for 30% off and free shipping on the book.

Ticket Info: Pay what you wish; registration required at /tickets/bugsy-siegel-2021-04-26 to receive a Zoom link